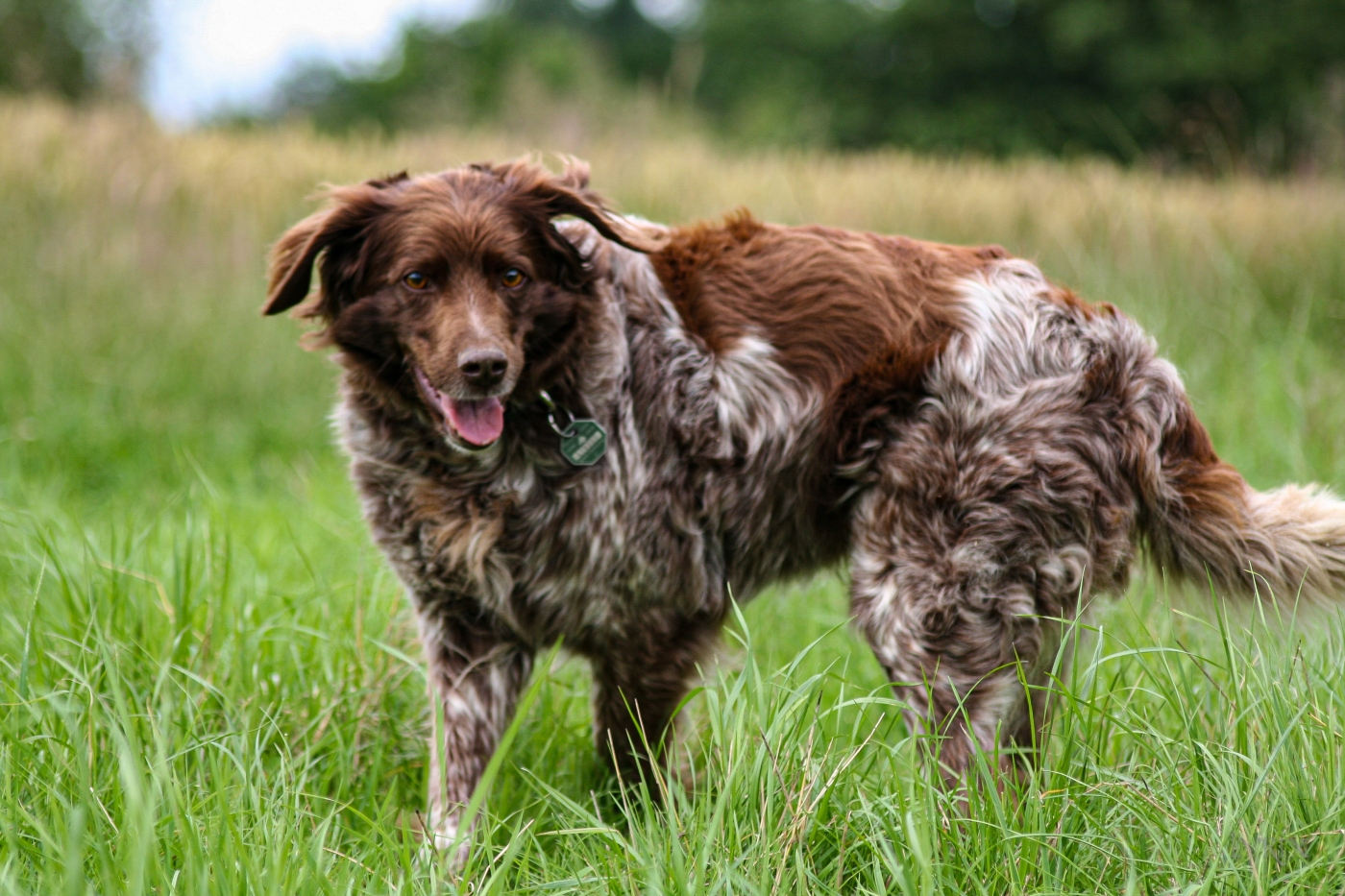 It is said that for everyone who lives with dogs that there is only one dog in life, that is the dog. The one which reaches a special kind of affiliation, that goes far beyond just beeing any house pet. This dog is a true friend and means more to his human than any of the other dogs they shared their live with… no matter how funny, strong, intelligent, loyal, fast, whatever… the other one were, are or will be.

My one dog, my true familiar and friend was Hexe, what means „witch“. People often ask me why i gave her that name… she wouldn’t be a bad bitch at all. I guess thats what people connect with witches. I told them, that i gave her that name because she was so charming. Thats what i associate with witches, especially with my witch. In fact she was the most gentle dog i’ve ever seen, except when somebody disturbed her while she was a digging a hole… that was the only way to make her rage out. Besides that she loved flowers and butterflys. She snuffed on every flower that crossed her way and watched the butterflies fly whenever they were around.

People perceived us as a duo… a team. When somebody met me and didn’t see her coming i was instantly asked where Hexe was. Nobody believed that i would go anywhere without her. Usually she was just direct behind me in such situations… and walked around the next moment. The people loved it, when she stepped nearer to greet them in her friendly manner… a lot of them feared dogs until they met her. For some of them it was the time that they touched a dog. I liked to see the fear in their face vanish in that moment… in changed into a smile. That was a big asset as i also had her by my side at work in the youth welfare sector. The teens liked her very much, even played soccer with her and asked me to tell one of the many storys about her. There were a lot of storys…. for example about the day in the netherlands, when she had a frog in her throat… or when she fell into the african compound of the Leipzig Zoo and tried to swim to the giraffes. I catched her in the very last moment and pulled her out of the ditch.

Family, friends, collegues, kids i worked with… they loved to see her play dead dog when i commanded her to „croak!“… and also when i begged her to resurrect. When i had licorice, she had done anything to get one of them… i never gave her some but she started to dance around in circles on her back legs anyway. I gave her dog treats instead… licorice is pure poison for dogs. I don’t know at all why she was so greedy on that stuff.

The times when i was into Fantasy roleplaying i took her with me for Larp-Events. Sometimes Hexe was my companion, when i played a ranger, knight, mage or monger. When i played something like a zombie… she played the wardog. I let her jump to my throat to kill the evil zombie… i fell down to the ground backwards and she acted like a raging beast that was shredding my throat while i screamed out loud. Some people were really shocked, perhaps that trick wasn’t very nice of us… 😊

When she grow old and got weaker from month to month, it was very hard time. I needed a while to realize the truth… to be honest, i refused to accept that it was time for her to leave until the very last weeks. Each day we carried her into her beloved woods, so that she could have a short walk there. She already was very weak, but there was still live and will in her eyes.

The day that even this will to live yielded away was horrible. I had to meet the hardest decision of my life. My brother and i buried Hexe in her favourite wool blanket beneath a bush… a witch hazel. I hope she is lucky in the great eternity filled with holes, flowers and butterflys.

This was in 2014, Hexe was over 15 years old when she fell asleep for the last time. I am looking forward to see her again when the time has come.